She has served on many boards and committees, including the Episcopal Council for Christian Education (ECCE), Proclaiming Education for All (PEALL), and the National Association for Episcopal Christian Education Directors (NAECED).  Conferences in which she has been on the design team include “Will Our Faith Have Children? Christian Formation from Generation to Generation” (2003), “Wrestling With the Big Questions: Loving God with Our Hearts, Minds and Souls” (2006), Kanuga’s Annual Week of Lifelong Christian Formation (2007-present), and Western Christian Educators Conference (2009-present). Sharon is a noted speaker at conferences and diocesan events on a variety of topics, including Confirmation, choosing curriculum, spirituality, faith development, and stewardship with children.

Her other writings include articles in Episcopal Teacher, Episcopal Life, Vestry Papers and Treasure Magazine: United Nations Rights of the Child. She has written numerous study guides to books, including An American Awakening and Conversations with Scripture: Acts of the Apostles.  She and her husband, John, have been married for 33 years and have two grown children. Sharon resides in Norwalk, Connecticut. Contact her at spearson@cpg.org. Read her blog Rows of Sharon, follow her on Twitter @rowsofsharonp and receive her newsletter, Living IN-Formation by subscribing here.

Before discerning a call to ordained ministry, Robyn was a Physical Education teacher. She received an Master’s of Divinity from General Theological Seminary. She is a sought after speaker and facilitator and has taught numerous courses in diocesan Schools of Ministry as well as Moravian Theological Seminary where she received the John Hus Award in 2001 in special recognition for outstanding service and loyalty to ministry,

While on staff in the Diocese of Pennsylvania, she was one of the founders of The Children’s Charter for the Church movement which recognized and strengthened the role of children in the life of the Church. Her publications include: Educational Inquiry, Treasure Magazine – Jerusalem, UN Rights of the Child, and Mexico, and the Will Our Faith Have Children video and study guide. One of her newest joys is four-year old grandson, Jonathan, who lives with his parents on Long Island. Robyn can be reached at rszoke@stjohnscarlise.org 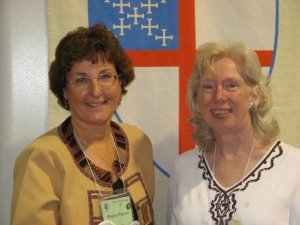 Sharon & Robyn attended the 76th General Convention in Anaheim, CA during July 2009. While there, they signed books at the Church Publishing Inc. booth and attended hearings at the Education Committee meetings regarding The Charter for Lifelong Christian Formation.

2 Responses to Meet the Authors