Paul’s Letter to the Philippians

In Year A of the Revised Common Lectionary, Proper 20 through Proper 23 offers a semi-continuous reading of Philippians during the Epistle, or New Testament reading.

Paul wrote this informal letter while he was in Rome (Acts 28:16-20) or Caesarea (Acts 23:35), or possibly Ephesus during an unrecorded imprisonment in his two-year visit there (Acts 19:1-10). At the time of writing (between 53 and 63 CE) he did not know “whether by life or by death” (1:20) he would be called upon to honor Christ. Nevertheless, he wrote in a mood of serene happiness and triumph. More frequently than in any other of his other letters he used the words joy and rejoice.

Many biblical scholars believe Paul quotes from part of an early song about Jesus (2:6-11). He uses the song merely as an illustration, to urge the Philippians to imitate Christ’s humility and his willingness to suffer for others. But the song also show what the earliest Christians believe about who Jesus is: “truly God,” “he became like one of us,” he is now “honored . . . above all others,” and one day “at the name of Jesus everyone will bow.”

Written to the members of the church at Philippi in Macedonia, his purpose was to thank them for their gift brought by Epaphroditus (a member of the Philippian church who brings gifts from the congregation to jailed Paul (2:25), and to share with them some of his own experience as a Christian. His theme is about the cost in self-sacrifice and suffering that is overshadowed by his joy in living “in Christ.” 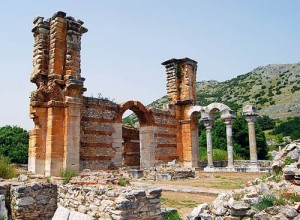 Ruins of a basilica circa 4th C in Philippi

Philippi was a Roman colony located on the coast of northern Greece about ninety miles northeast of Thessalonica. Named for Philip II, king of Macedonia (359-336 BCE), it was heavily populated by war veterans. According to both Paul and Acts (16:11-40), the church at Philippi was the first church Paul established in his mission to the gentiles of ancient Macedonia.

Shrine for where Lydia was baptized by Paul in Philippi

Archaeological evidence has shown that women were leaders in some of the religious cults at Philippi. From Acts we know that one woman, Lydia, was Paul’s first convert (Acts 16:4).

Proper 20: Philippians 1:21-30 – Paul’s desire to be with Christ must be put aside in order that he may be with the church as he still has much to do. He wants to be sure that the Christians at Philippi are firm in the faith.

Proper 21: Philippians 2:1-13 – Paul encourages humility and obedience in the members of the congregation at Philippi. He describes the humility of Jesus Christ in the words of an ancient hymn that extols the saving work of Christ. Paul counsels reverence, as they work out their salvation, for it is God who works in them for his purposes.

Proper 22: Philippians 3:4b-14 – Paul confesses his need to give up arrogance while understanding that all have not reached perfection in Christ as of yet.

Proper 23: Philippians 4:1-9 – Paul writes of joyful faith and dedication to describe his inner peace and his relationship to others. Paul acknowledges the gift of the Philippians in sharing the burden of his troubles.

Wife, mom, grandmother; author, educator, consultant; trying to make a difference one action at a time. Christian formation has been my vocation for 40+ years - and counting!
View all posts by Sharon Ely Pearson →
This entry was posted in Education and tagged Epistle to the Philippians, New Testament, Paul the Apostle. Bookmark the permalink.

2 Responses to Paul’s Letter to the Philippians